How to: Crash your System (BSOD) using keyboard a Registry Hack

Everybody using windows might know Blue screen of Death or at least you may have heard somewhere and people who have been lucky enough to have never encountered such BSOD System Crash could try this trick. We usually try to avoid BSOD but here we would be creating BSOD using this trick. This sounds crazy to knock your own system but its interesting. Try in front of your friend he sure will be amazed and impressed by this. You just need to enter one registry value in Registry Editor and  System Crash as soon as you use keyboard Shortcut key Right Control key + Scroll Lock + Scroll Lock and System Crash With BSOD Screen. This isn’t a bug, in fact it’s a Feature which is provided by Microsoft. Believe it or not Microsoft added this as a feature for testing purpose where user could create such memory dump operation. There is also a kb article written by Microsoft. 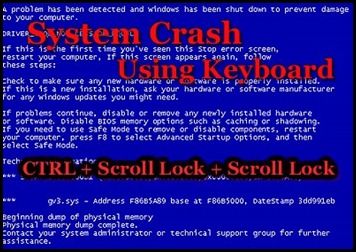 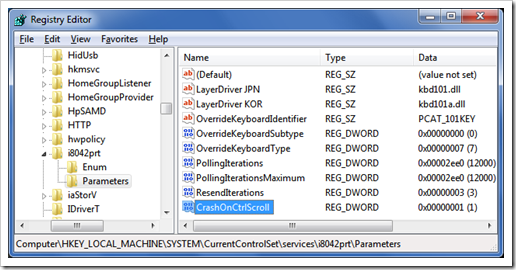 3.) Now Right Click on Right Side pane and Create new DWORD key named CrashOnCtrlScroll, giving it a value of 1.

Reboot the System and try to trigger the BSOD System Crash using keyboard, Press Right Control key and Scroll Lock twice simultaneously. To remove this feature just delete the registry key which you added named as CrashOnCtrlScroll and Restart your System.

Note: This will actually Crash your System as soon as you trigger keyboard shortcut.